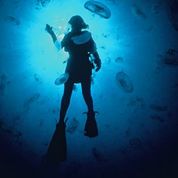 As I was saying on my Facebook page . . . with “Mission Blue,” filmmakers Stevens and Nixon unabashedly do their part to raise Earle’s profile, and to make clear why she is often affectionately – and also respectfully and deservedly – called “Her Deepness.”

This unassuming scientist has spent hundreds of hours underwater, going back to the mid-20th century, and to get to know Earle is also to get to know her work as a marine biologist and her message – a message echoed by a half-dozen others in the film, including film director James Cameron, who pretty much divides his time these days between making blockbuster movies and pursuing ocean exploration. In a media world awash in vines and videos and various forms of programming focused on so many who have often done relatively little, it is refreshing, and often inspiring, to spend 95 minutes watching a film that gets us better acquainted with someone like Earle who has done so much – and continues to, even as she dauntlessly approaches the age of 80. She is still diving, still lecturing, still traveling and tirelessly speaking out about a truth that’s as inconvenient as any Al Gore revealed.

Earle’s inconvenient truth, and the central message of “Mission Blue,” is that the oceans of the world, Earth’s life support system, are in imminent danger of passing a point of no return. There are few better messengers than Earle, who has dived the world over and has personally seen the troubling changes in the marine world. Like a biologist who returns to the Amazon to find swaths of forests gone, Earle revisits places like an area in the Coral Sea, a sizable swath of ocean to the east of the Great Barrier Reef. Earle first dived there in the 1970s, and in vintage footage we see glimpses of a kind of undersea Garden of Eden and the pristine realm she describes. We also see a thirtysomething Earle, who bears a remarkable resemblance to Sigourney Weaver around the time of her role in “Gorillas in the Mist,” in which she played Dian Fossey, another scientist with a mission (and, incidentally, “Mission Blue” co-creator Robert Nixon was a “Gorillas” co-producer).

At a spot in the Coral Sea about 100 miles east of Australia, Earle takes a dive with several others, including filmmaker Stevens, and we see a coral reef that looks like the ashen, charred remains of a lush landscape incinerated by fire.

“We’ve come out all this way, and all we find are ruins. The place Sylvia remembered so vividly is gone,” says Stevens, as narrator.

Earle adds: “I am driven by what I know, by the reality, as a scientist looking at the evidence, that my species, the world I know, the world I love, is in trouble. People I know and love may not realize how much trouble we’re in.”

Perhaps they will now – and that awareness is the hope and the intent of “Mission Blue,” which is also the name of a global initiative of the nonprofit Sylvia Earle Alliance, formed in response to Sylvia Earle’s 2009 TED Prize wish. Earle urged people “to use all means at your disposal — films, expeditions, the web, new submarines — to create a campaign to ignite public support for a global network of marine protected areas; Hope Spots large enough to save and restore the blue heart of the planet.”

This film furthers that goal, and as a bonus viewers get to know something about Earle and her achievements, including such milestones as her role in Project Tektite II in 1970. Tektite, a spinoff of the U.S. Navy’s experimental sea-floor bases called SEALAB I, II and III, became a career booster for Earle by making something of a media event out of the all-female team of aquanauts who spent two weeks diving, living and working at this sea base off the coast of St. John in the Virgin Islands – just like the previous all-male teams of aquanauts. (Yes! Women can do this diving stuff too!) The site where Tektite had been placed, 45 feet below the surface, is another that Earle revisits in “Mission Blue,” and she finds yet another seascape where life has clearly gone missing – “dead zones,” as badly degraded areas are called.

But it’s not too late to restore sea life, and one of Earle’s immediate goals, as mentioned in the film, is to work to increase the amount of protected marine areas from less than 5 percent globally, as is the case today, to 20 percent by 2020. Earle’s message is also one of hope – as in the protected “Hope Spots” she wants to see created – which should give us all hope, especially since it’s coming from Her Deepness herself. But in order to sustain hope, we all need to take action, as “Mission Blue” forcefully reminds us, with Earle leading the way, as she has now for years.

“If I could be born anywhere in time, it would be now,” Earle says in the film, “because this is the time, as never before, that we know, we understand what we didn’t know 50 years ago. If we wait another 50 years, opportunities we now have will be gone. This is the moment. Our decisions, our actions, will shape everything that follows.”